66 years of organizing and winning!

Migrant domestic workers have been coming to Canada without full immigration status - which means without full rights - since 1955. We have been exploited and excluded for 66 years. But it also means we, and the care workers before us, have been organizing and winning for 66 years!

And the fight for our rights is not over yet. Join us in-person or online on June 20th for actions happening across the country to demand better: No waiting, No caps, No barriers, Status For ALL!

Today on International Domestic Workers Day, we reflect on the history of migrant care worker organizing:

WE hold up the Canadian economy - temporary foreign workers like all of us make up 10% of private household workers in Canada. Thousands of undocumented mostly racialized women are doing in-home domestic work, and even more are working in long-term care homes and as personal support workers.

But unfair immigration rules push us into abusive jobs; tie us to our employers for health care and housing; restrict us from being able to study freely; put us at risk of exploitation from recruiters and consultants, and for deportation; and separate us from our families for YEARS!

We know the rules only change if migrant care workers come together and fight for our rights. Join us! 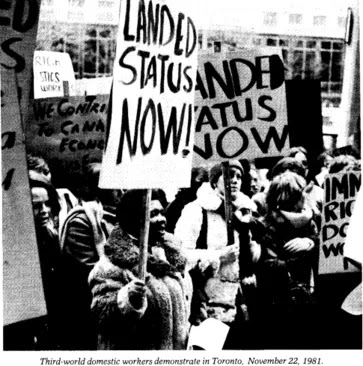 November 22, 1981: Care Workers from the Philippines, Caribbean and the UK gather in a protest of thousands in downtown Toronto. Four days later, on November 26, then-Immigration Minister Lloyd Axworthy, bowing to nearly a decade of mobilizing by immigrant women, created a path for domestic workers to gain permanent residency.