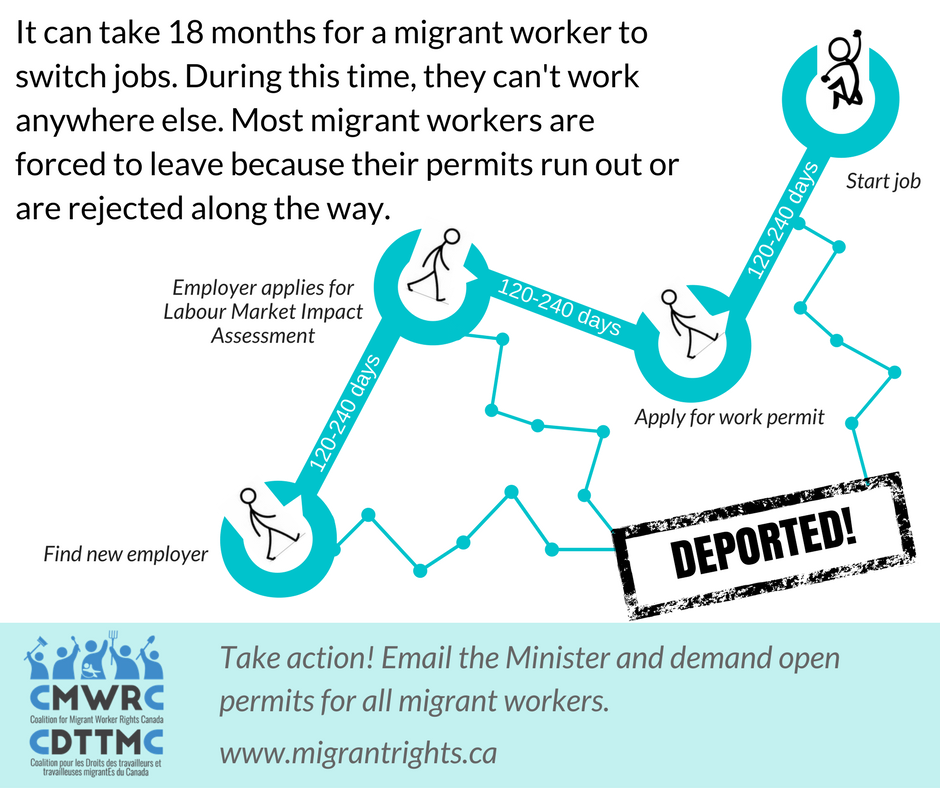 On January 30th, the Federal government is set to announce new policies for migrant workers, including caregivers. Whether these laws are good or bad is up to you.

Email the Ministers right now to create open permits for migrant workers. We have only until January 30th. We have made a very simple tool which will take you just one minute to contact them. Click right now to email and tweet.

Of all the injustices that migrant workers face, one of the most brutal is that many of us are tied to our bosses. Under Canadian laws, tied work permits make it so many caregivers can only work for one employer at one location. It’s almost impossible to leave a job, even if we are facing abuse or the job is making us sick. Here’s what Caregiver, Comfort Sister, has to say:

“When I lost my job, I was kicked out of the house with nowhere to go. Since then, I have not worked because I’m afraid that if I work for another employer, I will be deported. I do not have money, I left my family back home, I have my children’s school fees to pay. The government needs to hear all of this. We want open work permits so that we do not have to be afraid or stuck anymore.”

Being tied to one employer means many migrant workers live in misery. There are farm workers who are not allowed bathroom breaks as they sweat in the fields and greenhouses, working with pesticides without safety equipment. As you know, there are Caregivers  working 14 hour days but are being paid for only six.

This isn’t fair. Employer tied work work permits are unjust. They must stop. We have less than a week to make it so.

On January 30th, the Federal Government will respond to a Parliamentary Committee report on migrant workers. The report has recommended that the Minister “take immediate steps to eliminate the requirement for an employer-specific work permit”. Email the Employment Minister Patricia Hajdu today and and tell her to do the right thing. Insist on open work permits for all migrant workers. Tell your friends to do the same.

Just two weeks ago, our collective action stopped Gina Bahiwal’s deportation. As she said, “this is a victory for all migrant workers, however the fight is not over yet. Myself and the other workers are going to continue to organize and to fight against the injustices of our immigration where we are tied to a single employer. The only solution is permanent immigration status on arrival for all temporary foreign workers”. Let’s continue the struggle.