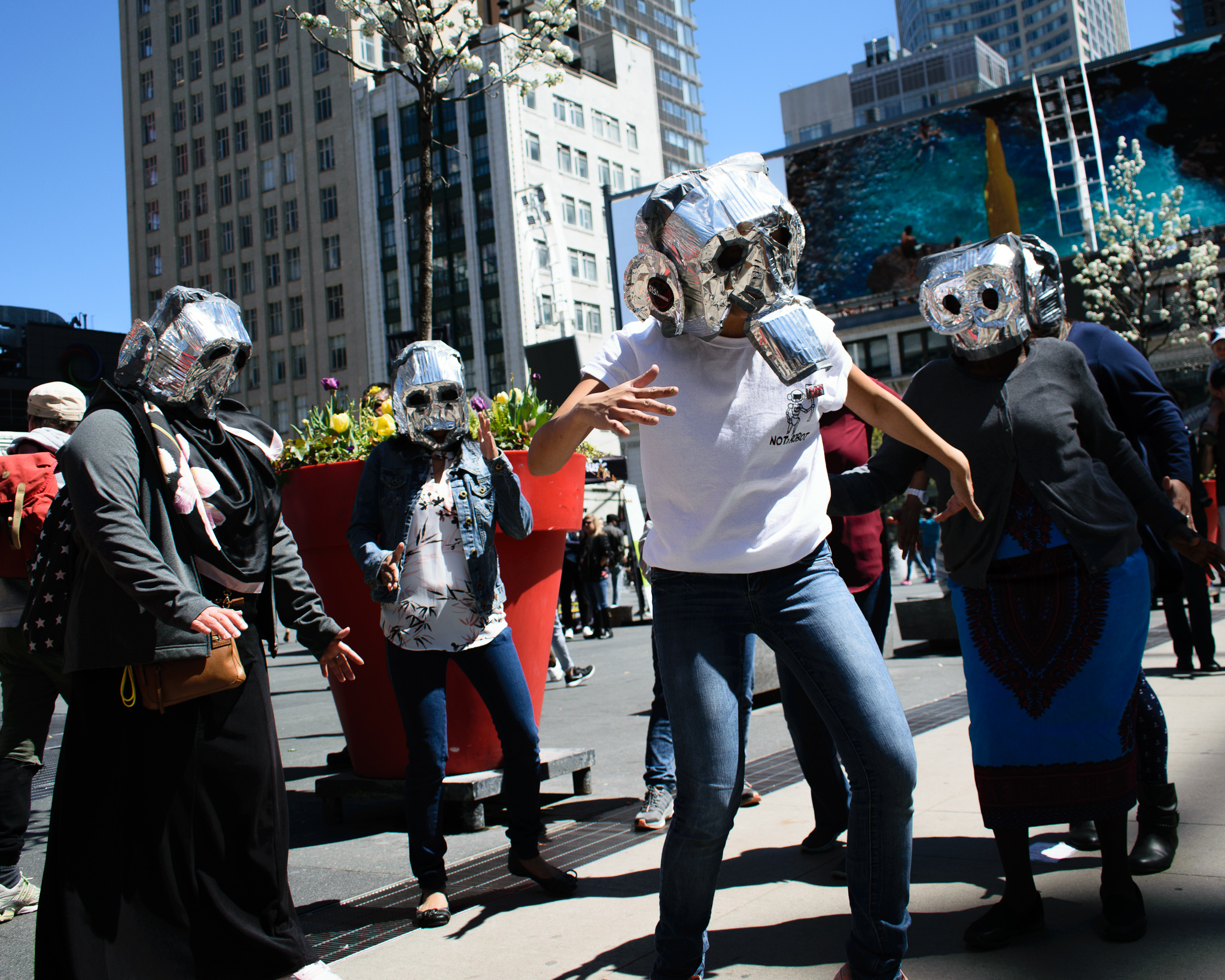 In Toronto, migrant caregivers took over Yonge-Dundas Square for Mother’s day on May 13, 2018 in a very successful action. Caregivers donned robot masks with banners, and signs that read #NOTaRobot blocking the major intersection of Yonge-Dundas demanding to be treated as humans with full rights, not machines. The action was organized to call for permanent status on landing for Caregivers. Following this, 10 caregivers in robot masks started a flash mob dancing to the song Beat it by Michael Jackson. They took off the mask mid-performance to signify an end to being treated as robots as they invited other caregivers and allies to join in the performance.

“We can’t take care of our own families because we have been separated for years, and that’s why we are calling on the government to give us permanent residency upon arrival and to have their families with them when they get here.” said Caregivers Action Centre organizer Kara Manso.

“We are calling the government to be fair and to listen to us to want we want and what we need,” said Johnalyn Firmeza, a mother of two children, who moved to Canada in January 2004 and worked as a Live-in Caregiver. She is an active member of Caregiver Connections Education and Support Organization (CCESO).

“Now the government is trying to change the program and we want them to listen to us, those who live this life, and give us all permanent status right now.” said Maria Teresa Mercado Loaiza from Bolivia, to those gathered. She has been working in Canada as a caregiver since 2015.

Caregivers across Canada are united in demanding an open and transparent consultation process that prioritizes the voices and demands of caregivers.

“We have been fighting for better working conditions and we continue to fight for us, we have always been there fighting for you. Now is the time that you fight for us too! Together, we will win!” said Winnie Nyokabi to allies. Winnie is a caregiver from Kenya, also a Caregivers Action Centre member.

This action was co-organized by Caregivers Action Centre and Caregiver Connections Education and Support Organization (CCESO). It was supported by Migrante Canada, Migrante Ontario, Migrant Workers Alliance for Change, No One Is Illegal – Toronto, Justice for Migrant Workers, Workers Action Centre and others.Caregiver Connections Education and Support Organization (CCESO) were among the groups present at the action to show solidarity as four caregivers spoke out.

Dozens of migrant caregivers were part of this action in Toronto. A cross country Day of Action with caregivers taking it to the streets in Ontario, Alberta and British Columbia also happened at the same time. These actions took place as the federal government is quietly and secretly planning to change the Caregiver Program, set to expire in November 2019.

Here are links to the news coverage:

Let us continue organizing! Together we will win! Join us at our New Members meeting at Caregivers Action Centre.